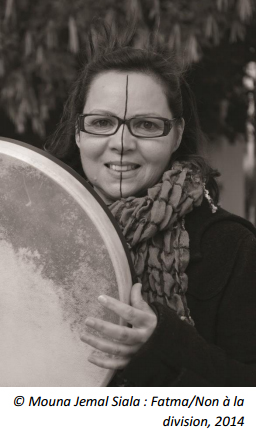 The Art of Fatma Charfi is one that was born out of intense sorrow. The origins of her works where instigated by the events that unfolded in front of her eyes, at the time of the first Gulf War, back in 1991. This was a time of great sadness throughout the entire Arabic world. Sitting in her apartment in Bern, Switzerland, she, like so many others, watched the brutal scenes of the bombing on the city of Baghdad. When we met, back in 2006, she recalled that grief-stricken evening with such clarity and described how she watched with tears streaming down her cheeks, the inconsolable horrors of the mass murders inflicted on the innocent people of Iraq. Numb and in shock she stretched out her hand, blindly fumbling to find the hankies in her box of mansized tissues on her glass coffee table, in the middle of the room.

One after another she twisted the tissues with her fingers, rubbing them fiercely with her thumb and first finger as they slowly and gently fell down onto her wooden floor. Continually pulling, involuntarily crying and sobbing with exasperations, sheet by sheet, these man-sized tissues where wrenched out of the box and then the next and the next, until the entire box was empty. The rest of the night was a blur but she remembered falling asleep in a wet pool of her own tears that where generously soaked up by her fresh white Egyptian cotton covered pillows. When she woke the next morning she saw, with utter amazement, what she had done. There, all over her wooden floor, in her front room where the fallen angels; the symbolic message of this terrible Arabic massacre. On seeing this sight, she fell to her knees and wept, determined to make the world take note of their numerous acts of wickedness.

Finally, she had found her voice and her medium. So began the age of the figurine, which Fatma named, her “Abroucs”. Over the next three decades Fatma used her Art in glorious ways; sometimes she would support Arabic and African women and their plight of being marginalized and ignored; at other times she would highlight the injustices of Switzerland’s ironic status of neutrality and their naivety to the countless human rights abuses that take place across the world but specifically in Africa. 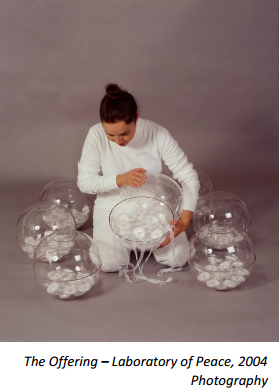 The highlight of her career is to be found in the installation entitled, the “Laboratory of Peace” – the compassion and sensitivity in her Masterpiece or Mistresspiece is overwhelming, the work is not only powerful and poignant, it is also emotionally moving and capable of touching even the darkest of souls. She told me over the phone that she was so delighted that children from all walks of life, would leave her exhibition in floods of tears, so blown away at the marvel of its simplicity and transparency. In her passing she leave a cultural vacuum, not only for Tunisia but also the World.

Fatma Charfi was born in 1955 into a large family of Maghrebi nautical cartographers from Tunisia. * She was the fifth child and the only daughter of eight and grew up with her seven brothers and mother, Nabiha Ben Cheikh and father, Abdel Raouf Charfi in the city of Sfax. Her artistic career began in 1974 at Institut Supérieur des Beaux-Arts de Tunis in the capital, Tunis where she studied for her degree in Fine Art. In 1977 she went on to train as a cartoonist in Poland. In 1980 she moved to France and worked on her doctorate in “Artistic Aesthetics” at the Institut d’Estétique et de Sciences de l’Art de Paris | Sorbonne, and in 1985, she was awarded a PhD for her thesis related to the experimentation and the study of water; a year later she moved to Bern, Switzerland to attend the École Supérieure d’Art Visuel de Genève, where she enjoyed an internship.

Fatma was awarded the Jury Prize at the Alexandria Biennale, Egypt, in 1999 and took part in the Dakar Biennale, Dak’Art 2000 and became the first female artist to win the Grand Prix Léopold Sédar Senghor. She returned to Dak’Art in 2004 and again won the price for the second time, she proudly used to boast that she had danced with the Senegalese President and just how well she danced. ak’Art honoured her again in 2010 and exhibited her artworks in a Retrospective at the Biennale.

Throughout her career Fatma exhibited her works in numerous countries including Tunisia, France, Switzerland, Egypt, Senegal, Germany, Spain, Dubai and America. Her works where shown extensively in the USA, mainly in Group Shows like “Shatat Disapora”, Arabic Women in Art at the University of Colorado Art Gallery, Boulder in 2003 followed by “A Fiction of Authenticity” shown at the CAM Saint Louis, 2003; Carnegie Mellon University’s Regina Gouger Miller Gallery, Pittsburgh, 2004; Blaffer Art Museum, University of Houston, Texas in 2006. She leaves behind her son Nabil M’seddi Charfi, aged 30 and her daughter Emna M’seddi Charfi, aged 25.